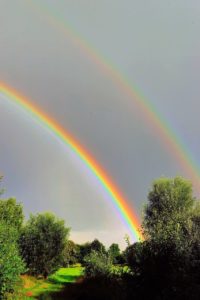 Some people live as though life is a scientific coincidence or accident. I believe in science. I believe God to be a scientist. I also believe Him to be a masterful artist and a mystic, the creator and the force behind everything good.

I believe God to be love.

Life without that belief is empty, at least emptier than I want my life to be. You could argue (and I have) that I believe because I want to, because I can’t bear the thought of an empty or accidental existence. But I have evidence. It is both everywhere and nowhere, tangible and intangible.

This morning as I jogged, I got caught in the rain … and loved it! I raised my arms in surrender to the heavens; and rather than feeling like a prisoner, I felt like a freed bird!
The forces of nature are the forces of God. Dare to run with them. Dance with them. Sing with them. Cry with them. Be still with them. And they will make a believer of you!

Life is neither empty nor random. Sometimes it is dark. But the sun is faithful.

« Do you let your partner know you, love you?
Is our spirit love or fear? »