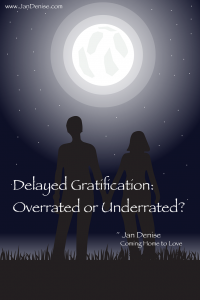 It’s interesting to sit in the middle and get mail from both sides of the proverbial aisle about immediate versus delayed gratification.

“He has a drink and he can’t contain himself. …All of a sudden, having sex is no more than eating another potato chip,” writes one reader.

“She has no idea how to just relax and enjoy the moment. …I don’t know what she’s saving herself for,” writes another reader.

When is it in your best interest to let go and trust the moment? And when are you better served by “good things are worth waiting for”?

According to Daniel Goleman, author of “Emotional Intelligence,” those with high emotional intelligence have the ability to understand and control emotional responses. They can manage their feelings and curtail inappropriate expression of their impulses.

Now, all you have to do is figure out what’s inappropriate — like the 4-year-olds in Goleman’s “marshmallow test,” which he says demonstrates the power of emotional intelligence. Each of the preschoolers was left in a room with a marshmallow — they could eat it immediately, or wait for somebody to return from an errand and then be treated to two marshmallows.

As a 4-year-old, how long would you have waited to upgrade your treat from one marshmallow to two?

Some of the children waited for 15 to 20 minutes for the researcher to return. They covered their eyes to avoid the temptation of the marshmallow, talked to themselves, sang or played games. The more impulsive children grabbed the one marshmallow within seconds of the researcher leaving the room.

So, what can a “marshmallow test” with 4-year-olds really tell us? When Goleman caught up with these children as adolescents, those who had curtailed their impulse to go for the single marshmallow and held out for two marshmallows were more self-reliant, more effective in personal relationships, better students and able to handle stress better.

Those who yielded to the one-marshmallow temptation were marked by troubled relationships, shyness, stubbornness and indecisiveness. They were much more likely to have low opinions of themselves and mistrust others. And, they scored an average of 210 points lower on their SATs.

If you were (or are) a one-marshmallow sort of kid, don’t despair. Goleman believes emotional intelligence can be learned. But, emotional control taken to an extreme has a dark side.

It’s not in our best interest to be too guarded. We can convey humor, affection and spontaneity more readily if we’re willing to act on what we’re feeling. So, where do you draw the line?

You don’t want to curtail your own happiness! And you can do that by being too guarded or too impulsive.

To maximize your happiness, become more aware of what you’re feeling, where it’s coming from and where it’s likely to lead you.

If, for example, you’re afraid of getting hurt because of a bad breakup, acting on your fear by staying home on a Saturday night can shield you from pleasure as well as pain.

Learn from the past, but don’t waste your time regretting it. Live in the present, but not at the expense of the future you want.

And remember, you’re not 4 anymore. Once you’ve learned discipline, you can create just about as many “marshmallow” rewards as you care to eat.

« Free …
Take another shot at asking for what you want … »