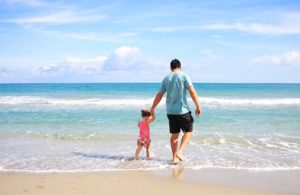 I have a dilemma … I love my girlfriend to death, and I’m sure we’ll get married one day, but my little girl (who’s 21 and in school) won’t hear of it. When she was only 9 years old, her mother died … and since then, she’s had me all to herself. My girlfriend has two children of her own, and although my daughter is very confident, I think she’s afraid of being outnumbered and losing me.

Even when children appear to be very secure in a parent’s love, they can be afraid of losing it, especially if they’ve already lost one parent. But rather than think of a father as withdrawing his love, a child might prefer to think of somebody else as taking it.

It’s easier, in this case, for the daughter to fend off the girlfriend as a threat … than to admit to herself and her father that she’s afraid of losing his devotion. Intellectually, the “little girl” knows that her father is there for her, always, but she still feels vulnerable.

The father described her as being “high maintenance”; and because he is always there, she might not realize that she’s capable of low maintenance or of handling some of the maintenance on her own.

One of the most valuable things we can do is teach children to work through their vulnerability. Often, we find it easier to protect them (or handle it for them) … and that’s how we teach them to avoid — rather than face — what scares them. Their confidence, then, is not in themselves.

When a situation like the one above comes up, it’s an opportunity to help a child look at what they’re afraid of, but sometimes parents don’t want to wade too far into a child’s fear or insecurity. In fact, even parents who tell me that a child is afraid might struggle to accept it when they hear me say it.

“Even if you were fortunate enough to grow up in a safe, nurturing environment, you still bear invisible scars from childhood, because from the very moment you were born you were a complex, dependent creature with a never-ending cycle of needs. Freud correctly labeled us ‘insatiable beings.’ And no parents, no matter how devoted, are able to respond perfectly to all of these changing needs,” says Harville Hendrix in his bestselling “Getting the Love You Want.”

Hendrix shares that he and his wife, despite their best intentions, didn’t meet all of their daughter’s needs because they were too tired or distracted or unwittingly passed on their own childhood wounds.

Even if you were to be more loving parents than Hendrix and his wife, there is still, as they point out, the strange dog or slip in the pool that leads to fear. And unless you are willing to face the fear, you can’t help your child to face it.

I’m not suggesting that you wallow in it or even live with it. When you and your child confront the fear, you can also overcome it.

In the famous words of Franklin D. Roosevelt, “There is nothing to fear but fear itself.” Roosevelt said those words in his inaugural address in the height of the depression. He meant them!

This father has an opportunity to help his daughter face her fear … and realize — not just intellectually, but emotionally — that there is nobody who can steal or diminish his love.

As a practical matter, we only have so much time, but love is infinite. Sharing love means growing it. There is enough for everybody.

« When and Why do opposites attract?
YOUR flow … »