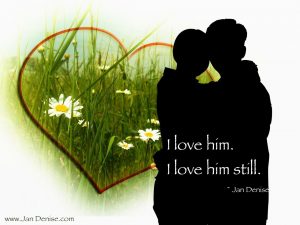 She loves me, she loves me not. ‘Tis the season of romance and daisies, and they can both be erratic. But if we made them predictable, we’d rob them of their charm and whimsy … and call them by another name.

Romance, the very thing that enraptures us — and inspires commitment — is by nature volatile! It’s no wonder we often struggle to keep a commitment and, subsequently, grow gun-shy.

From one moment to the next, love seems to fluctuate; and so it is that one resorts to pulling petals. It’s not really love that springs up and then disappears, though. It’s our level of satisfaction with our relationship. And while satisfaction is the most significant factor in commitment, we can gauge our overall satisfaction, rather than making a rash decision in an inflated or deflated moment.

Sam (my husband) came up with the idea that when partners disagree, they should imagine that they’re the only two people left on planet earth. Yes, he had this brainstorm after a disagreement with his wife (that would be me).

I was quick to point out that we couldn’t compromise our values even if it meant survival. I’m a purist … but so is he, so he readily agreed.

Nonetheless, imagining that you and your sweetheart are the only two people on the planet can lend a helpful perspective. Maybe there’s somebody else you’d rather be deserted with, maybe not. When we walk away, it’s because we imagine that we can get more of what we want with somebody else. But every “somebody else” has a mind of his (or her) own.

And, yes, the grass on the other side of the fence also requires nurturing to remain green. Besides, the closer you get, the more brown spots you’re apt to see!

Even so, greener grass is one of three factors in our vacillating about making and keeping a commitment; commitment being an ongoing choice.

When you and your sweetheart are busy pleasing each other, you’re not looking for options. You may not see greener grass even when it’s there. On the other hand, when she can’t seem to do anything right, the options are springing up everywhere like wild flowers that say, “Pick me.”

But the third factor (the first two being satisfaction and quality of alternatives) in Rusbult’s commitment model also comes into play. It’s investment. When we have invested essentially everything we have in a relationship, we can be downright scared to cut the cord — even if we’re dissatisfied and surrounded by greener grass!

It’s not quite that simple, though. When our satisfaction is low and our quality of alternatives is ever so lush, we hold back on investing in the relationship. And, yes, it deteriorates even more!

In that case, what we have to lose is less than we make it out to be. You might have an estate to cut in half; but you’ve already broken your commitment to love and honor, and the intangibles — the intimacy and caring — have all but died.

Then, in order to truly assess what you have, or the potential of what you have, you must start investing again. If your love was well rooted in more than fleeting romance, then you just might restore what seemed dead.

No, I don’t want to take romance out of the equation. But if you recognize romance as something that fluctuates, and give it a foundation that doesn’t, you won’t overreact to it.

You can pluck those petals with, “I love him, I love him still.”

« Do you make bad decisions to escape uncertainty?
Persistence is more than … »