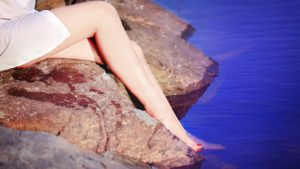 “She’s a cutie — if I weren’t married, she’s somebody I’d flirt with,” says my husband, Sam.

She had just asked (with a becoming smile), before taking our order, “Two Caesars and a Turkey Asiago?”

We’re predictable; but that’s not what this is about. It is about the charm and attraction of those we encounter and our inclination to flirt with them. We like to be noticed and remembered; we like to be known.

Often when we’re attracted to somebody (and have the guts to flirt with him or her, it’s because they’ve expressed some kind of acceptance or attraction to us. We don’t just go for what we want. We go for what we think we can get! That’s right: We want the best partner available — to us — so, we weigh the odds of a positive response before making a move.

And perhaps that’s why some people flirt with everybody! They’ve learned that most people find them attractive — or at least intriguing or sexy or something. If blondes really do have more fun, it’s because, based on studies, they experience a confidence boost by lightening their hair … and, yes, they’re more apt to initiate a romp.

To flirt, according to the Encarta Dictionary, is to behave in a playfully alluring way.

It’s much easier to choose to stay off the ice than it is to choose not to fall down once you’re out there. So, maybe it’s unwise to tease or tantalize somebody unless we want to deliver what we’re dangling.

What about compliments, though? They’re different. They don’t include the alluring part; and, unless we’re exaggerating or being sarcastic, they’re not really playful. Compliments are serious.

As is flirting, because it’s engaging somebody in an alluring way. And, particularly if we’re successful, there are alluring consequences to deal with (read: sex and babies) … and the fun can be cut short.

But what if it’s obvious that you’re playing? What if, for example, you’re 20 years older? What if you’re a vice president and he’s the janitor? Indeed, less likely couples have come together (and they only used to be scandalous). Besides, if you only flirt with the ones you couldn’t possibly be interested in, that could be construed as condescending. And it just might be.

Ah, what if your sweetheart is right there? Flirt with him (or her). That’s always more respectful than flirting with somebody else.

Even if you have no partner, think before you flirt, especially if your flirting has led you astray in the past! And, yes, flirting back is the same as flirting.

Taken lightly, flirting can lead you where you don’t really want to go.

Flirting with your sweetheart, then, can add passion to your relationship, leaving you with less energy to flirt with others. That’s right — you only have so much sexual energy to go around. Don’t be stingy; just be discriminating.

« Not just any mom, my mom … your mom
Check yourself for Band-aids … »