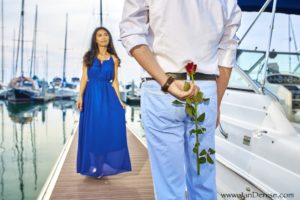 He said he’d call by noon. It’s 1:00 … and you’re still waiting to get dressed. You want to scream, but he wouldn’t be able to hear you. Besides, you don’t really want him to know you’ve been counting the last 60 minutes.

Instead of screaming — or counting the minutes — when you’re frustrated with a date, take a deep breath, and let him (or her) teach you something.

The teachers who challenged you the most taught you the most, right? The bosses who demanded more than you knew you had provoked growth, right? How else would you have landed the position you have now?

And, yes, the dates (and people in general) who challenge your sanity the most are your best teachers. They are going to help you pull off the relationship of your dreams!

If you’re protesting that she’s an airhead or he’s a jerk, read on. They don’t have to be well learned, refined or even willing to teach you what you need to know. All they have to do is push your hot buttons or trigger your insecurities.

It’s your stuff that stands between you and the relationship you want.

I’m not asking you to settle for the guy who can’t show up on time; I’m asking you to look at why his tardiness unnerves you. Maybe you think it’s disrespectful. I agree. But why does his lack of respect irritate you so much?

His behavior reflects him, not you. A person keeps his word out of respect for himself, regardless of who he’s meeting. So, if somebody doesn’t respect himself, he’s unlikely to show you respect; but it doesn’t change how respectable you are.

Just realizing that your reaction is rooted in self-doubt is a huge step. That’s right — admit to yourself that what really infuriates you is that he doesn’t seem to know how important you are! That’s not the problem, though.

The problem is that you don’t truly know how important, or worthwhile, you are! Or maybe you just need to be reminded that you like who you are, and that you no longer have to respond to rejection as though it’s a matter of survival.

If you don’t like who you are, ask yourself why. What would you have to change in order to respect yourself more? Rest assured that what you dislike is your behavior — not you — and only because it contradicts your values.

And when you’re mad at yourself, it’s easy to get mad at anybody else who gives you an excuse!

Maybe she’s always trying to get you to talk about your feelings. And maybe she’s an insecure nag; but don’t let that stop you from overcoming your fear of looking at your feelings and learning to talk about them. That’s exactly what you’ll have to do in order to land somebody who knows who she is and what she wants.

If you’re suddenly more motivated to learn and regretting the lost opportunities — or all those dates you’ve dumped — don’t worry. You can still learn from them; in fact, you just might find that all of them presented you with the same lesson.

Until you’ve dumped your insecurities, they keep getting triggered by the next one who gets close enough. You have as many opportunities as you need to heal what ails you.

So, next time you feel like screaming, instead of blaming the one who pushed your hot buttons, look at what’s behind the buttons. No need to worry about his bad manners or her attitude; instead, get the lesson you need to land the relationship you want.