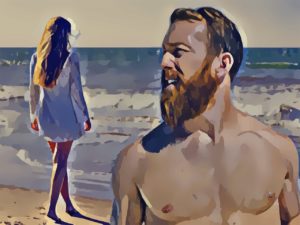 Years ago, while I was dating a psychiatrist, he told me that I was too often disappointed with him. I was goo-gah over his brain, and he melted me — and everybody else — when he smiled. He saw through people and felt warm toward them; and they knew it. Disappointed in him? Not this girl.

Bless my insecure little 30-year-old heart, though, I acted like I was. Because I felt inferior, I tried not to act intimidated or overly impressed. I was bold in expressing my insight into his issues; he was receptive — not defensive.

When he told me that our issues were clashing, I thought it was mostly about my not feeding his ego. I thought that was a good thing. Without realizing it, though, I continued to feed my own ego and want him to feed it.

Truth is, I wanted desperately to feel good enough for him!
Now I realize that he probably saw through my defensiveness, and understood his own need for reinforcement. He still wanted somebody who was impressed by him. I was — the condo, the car, the Yale degree — but I was unable to express that freely. I was too self-conscious about what I saw as my own shortcomings to ignore what I saw as his shortcomings and underscore his long list of strengths.

I couldn’t even do more pull-ups than he could … and that was the one thing I had over on almost anybody. Not exactly a significant thing, I know.

I’m telling you all this to get you to look at your own relationship. There’s a pretty good chance that your insecurity — or awareness of your shortcomings, if you prefer — screens your expression of appreciation for your partner.

Of course you’re aware of the rear end all your friends can’t help but notice, but if you’re really insecure about yours, you just might be very low key about his. Or maybe you criticize her diligence, without realizing that it’s because you wish you had more of it.

It’s tough to praise somebody else for precisely what we think we’re lacking, even when that somebody is our partner … even when we’re attracted to them because we think they help to make up for what we’re missing.

The toughest part is just getting it out in the open, just saying the words for the first time; but when we have the courage to be honest with ourselves about what we’re feeling, we have a shot at saying it out loud. And when we do, a loving partner can help us work through our insecurities … and find the guts to share their own.

Maybe your family, as weak as it seems, is what helped to make you as resourceful and independent as you are. But your insecurity about your background — or anything else — can keep you from being objective and grateful for what you’ve been blessed with. And it can also keep you, the way it kept me, from letting a sweetheart know how often you’re NOT disappointed in him, but rather thrilled.

We’re generally sensitive to rejection, and even neutral feelings. So if your sweetheart seems neutral about your rear end, you just might act neutral about her gorgeous eyes.

Sadly, two perfectly wonderful people can feel disappointing.
When you get stuck in your own insecurity defending yourself, it often means pointing to what’s wrong, rather than what’s right, with your sweetheart. Don’t assume he knows that you recognize and appreciate his positive traits. He’s essentially a person just like you with his own insecurities.

Reinforce what makes you both special, so you can realize even more of your wonderful selves.