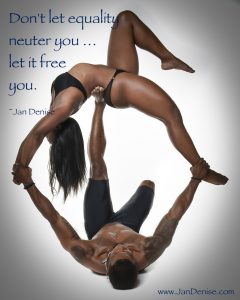 Men are confused! They instinctively notice women and want to be strong for them. And according to a recent study, men automatically view women as sexual.

I could have opened the door myself, but I like that he noticed me and opened the door. And I even like the idea that he saw me as sexual. It felt natural to both of us — until he stopped to think about what was politically correct.

Force messes up equality because it implies that somebody needs a handicap. The key is to recognize that we truly are equal; and that being equal, we can be — and want to be — different.

« Be empowered to choose love …
All fear is birthed by the same lie! »