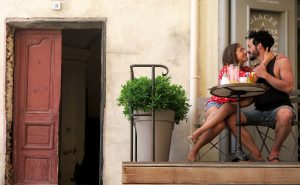 We’re so sensitive to rejection that we get a better view if we step away from it. Sales offers us an ideal window. Maybe you’ve heard about the new guy hired to sell life insurance. He’s offered one dollar for every time somebody turns him down. With nothing to lose and a dollar to gain, our novice fearlessly approaches as many prospects as he can. And, he gets rich—not because he approaches a million prospects; but because he approaches them with no vested interest in their response, and some of them say yes.