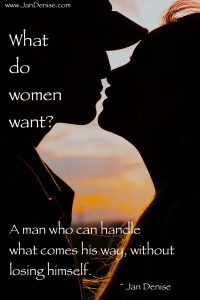 Men — and even women — have struggled for centuries to figure out what women want. At times (yes, it’s cyclical), it seems there is no pleasing them with anything.

“Things seem to be different. People are looking at me and seeing something in me. It’s like I’m being noticed, I’m someone they would like to know. And I’m seeing women I never saw before.

I thought about what I was feeling when these people looked at me. I wasn’t worried about whether somebody said “hi” back to me when I said “hi,” or whether they liked me or not. I felt like, I don’t need you to make me happy, I’m fine by myself. I mean I didn’t feel like a snob or I was better. I was just me, and I’m a nice guy, and you’re beautiful.”

« Dear Friends …
Are you sharing the real you? »