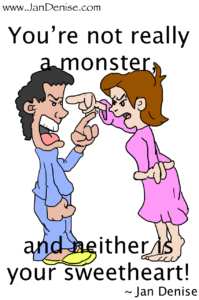 We’ve all had those moments when we stared dumbfounded at a partner…at least for a few seconds, before we retaliated. Remember that time she lost it and turned into somebody you didn’t want to know? The time his countenance actually changed right before your eyes — as if with special effects?

« Let Your Dance Be a Celebration of YOU!
Today … »