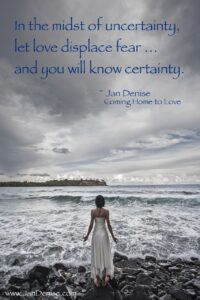 It’s no wonder we find ourselves reacting disproportionately when we get caught up in our emotions. While intellectually we know what makes sense — and manage to act on that at least occasionally — our emotions often kick in, particularly in affairs of the heart. No brainer, right?

We may act on the “reality” created by our emotions — or at least spout off about it — almost before we know it.
So, you’ve probably threatened divorce more times than you’ve filed for it … and had sex that you later regretted. And perhaps you’ve been in and out of some relationship to the point of embarrassment. Ideally, the intellect and the emotions are at peace, but when they’re not, we can experience some impressive — or not so impressive — yoyo antics.

We don’t like uncertainty; we’re programmed to make quick decisions. Up. Down. Up. Down.

Lodge explains that you can measure this in a lab. Experimental psychologists have repeatedly shown that humans will reliably make blatantly bad decisions to end the feeling of uncertainty. Getting married and getting divorced are among them.

When we’re in a committed partnership, we just might find ourselves screaming hateful things at the one person we’ve chosen to share the whole of our life with. And when we don’t know what to do in a relationship, instead of sitting with it or calmly gathering more facts, we just might consummate it or end it.

We may get caught — not just in our emotions, but in binary thinking. Either he (or she) is a louse or my knight in shining armor. Maybe you haven’t gotten to know what’s in between. Chances are, he’s capable of acting like a louse. Maybe you should marry him; maybe you shouldn’t … but to be certain (OK, relatively certain), you have to spend time with uncertainty while getting to know him.

Even then, once you’ve married somebody, you’re bound to be surprised on occasion by something you abhor. And when you are, uncertainty rears its head. Don’t panic and take the shortest route to a bad decision.

Remain calm, and put your oxygen mask on. Breathe. And — unless you’re truly threatened — remind yourself that, given the reality of your situation, you’re overreacting.

The survival programming you inherited over millions of years is still there, but you’re unlikely to encounter a predator around the bend.

You don’t really have anything to be afraid of. And without the fear, all that’s left is love — no anger, no frustration, no panic. That means that you can comfortably sit with uncertainty, even enjoy its possibilities, rather than overreact emotionally and leap to a decision.

Yes, you can program yourself to play nice. And, yes, you’ll still feel emotions. Peace and joy and exhilaration and compassion will serve you — and your relationships — well.

« Happy Thanksgiving!
What you want … »