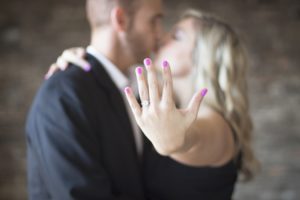 If you didn’t really stop to think about those words — for richer, for poorer — before you said them, they might be ringing in your ears.

You don’t have to lose your fortune, or your life’s savings, to realize how quickly it could happen. It doesn’t matter who you are or how hard or long you worked for it, it’s up for grabs. Well, almost.

Economic crisis, like any other crisis, shows us — and everybody around us — what we’re made of. And, no, you don’t have to lose your own butt to show it.

“Everybody in the family was talking about it, we knew she wanted more than his good looks and kind disposition, but nobody had the heart to burst his bubble,” writes one reader. “And now, face the truth, he must.”

We want to believe the best about ourselves and others, even when we don’t really believe it. So, two people can get married without either of them fully acknowledging — even to themselves — the ulterior motive!

Don’t be too tough on other people, though. Do take a good look at your own motivation as you develop relationships and also as you let them fade away. Make conscious choices about what you hold on to and what you let go of.

You can’t take “it” with you; and you can’t really control it. The value of money — no matter how much one has — will never be something ONE can control.

Fortunes, some of which took a lifetime to build, were lost overnight — mostly to panic, somebody else’s. People got scared and bailed. And the rest is history.

Remember when George Bailey (played by Jimmy Stewart) in “It’s a Wonderful Life” saved The Bailey Building and Loan? He was on his way out of town for his honeymoon when he saw what looked like a run on the bank.

Maybe you know the story: George stopped and spent the day calming shareholders and saving the Building and Loan. And his wife, played by Donna Reed, somehow managed to set up housekeeping in the abandoned house she wanted to have George’s babies in — by the time he got off work. Oh, and she’s also the one who gave up the honeymoon cash for George to dole out to the shareholders.

It’s my all-time favorite movie. I only watch it once a year, but it always makes me cry, always reminds me of what money is and what it’s not.

The economy is going to fluctuate. Take a look at what you’re made of, really made of, and try not to come from greed or fear. If you can come from love, instead, it won’t really matter what else happens.