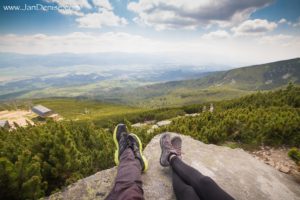 Once a month she hates me, and I can’t do anything right. It’s like clock work, so it must be hormones. But sometimes I wonder if she’s always unhappy with the relationship … and the truth only comes out once a month.

A wise man! Even hormonal shifts can only trigger existing feelings.

The hormones are not the problem. They are, in fact, the solution! They, if we let them, direct our attention where it’s needed.

The problem is that we don’t take the time to work through the conflicts. We suppress them, instead, but they don’t go away. They come back kicking and screaming every month … during a cycle designed to keep us at peace.

During the first half of the menstrual cycle, women’s hormones support a focus on other people and things outside themselves. Then, from ovulation to the onset of a period (in women who aren’t pregnant), their focus turns inward … and they’re less apt to ignore conflict to keep the peace.

If you’re a woman, you know the feeling — you’ve had enough, you’ve given enough, and you want to scream out, “Hello, I’m a person, too!” And, yes, sometimes we do scream out, maybe we even manage to say what we’re feeling — instead of just acting like a witch and fueling our anger.

If we continue to fill our days up with other people and things, though, the root of the conflicts are likely to remain unconscious through the kicking and screaming! Conscious or unconscious, we have prepared to “birth” what’s inside, and we let it out once a month.

In tribal cultures women were recognized as cyclic lunar creatures, and they went to moon lodges to rest and be taken care of. Resolving their conflicts meant resolving conflicts for the tribe as well.

Women didn’t (and still don’t) hate their partners, but they were aware of problems. And that trip to the moon lodge allowed the problems to surface in a safe place where they could be given the attention they required. The love women demonstrated for others during the rest of the month was just as real as the conflict … but it was more pure after the conflict had been resolved.

We, too, can make a habit of taking the time to understand our conflicts and needs. Only then can we articulate them honestly and openly, rather than masking them with anger and allowing resentment to snowball every month.

So, don’t ignore or “there-there” the conflict that screams out once a month. Set aside some private time to ask loving questions and get to the roots of the conflict. Getting to them requires some digging, but once you’ve found them, the healing process has begun. Love intuitively knows how to heal pain.

It’s the kicking and screaming part that throws us off — men tend to kick and scream back.

We’re in this together, for better or for worse. We get to choose.