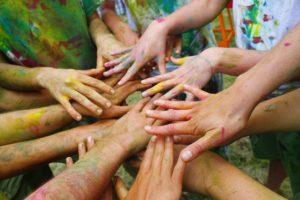 Different beliefs tend to divide us and draw lines between us — in politics, religion and intimate relationships. But we can use these same differences to remove the blinders that keep us narrow-minded.

“Buddhism divided over the questions that have always divided people,” says Huston Smith in “The World’s Religions.”

He goes on to identify the questions:

Are people independent or interdependent?

Is the universe helpful or indifferent toward its creatures?

What is the best part of the human self, head or heart?
You can, in the light of these questions, assess differences in your personal, professional, spiritual, political and civic relationships.

Now, consider this: The “right” answer to each of the three questions is “both.” Our binary thinking (it has to be one or the other) is a trap, a trap that leads to division of home, church, country and planet.

An open mind and heart lead us to the truth. The answers to the questions that divide us bring us together.

People are independent and interdependent. When they assume responsibility for themselves, they can help others … and get help when they need it. When they show compassion to others, they practice the art of loving … and feel better about themselves.

The universe is helpful and indifferent. It rains (as the Bible says) on the just and the unjust.

The best part of the human self is its ability to both reason and feel. The goal is harmony of heart and head. To pick one over the other is to be internally divided, or work one part against the other. And inasmuch as we are all interdependent, to divide into opposing sides is to work against ourselves.

The answer is stronger when we bring both sides together — not because we have two instead of one, but because we have a complete answer. We have an answer that will still be true tomorrow, an answer to live by, an answer worth fighting for that we don’t have to fight for. There is peace in the truth.

When we reach the truth individually, we have inner harmony … and we want to help others. We recognize that they have part of the truth and, rather than shoot ’em down, we want to help them find the other part.

In the meantime, we don’t have to marry them or live in their country. We don’t even have to like them.

Smith tells the story of two young Germans who, following World War II, went to Sri Lanka to dedicate their lives to the Buddha’s peaceable way. Both became monks in the Theravada tradition, with a focus on liberation through self-effort.

The first stayed with that tradition. The second switched to the Mahayana tradition, vowing compassion to help others find liberation through grace, with less emphasis on self-effort.

Near the close of the first monk’s life, a visitor asked him about the different Buddhisms that divided the young monks. The wise old Theravadin said, “If one, through self-effort, transcends self-centeredness, there is nothing left but compassion.”

To find the truth we ultimately seek, we must look at the sameness as well as the differences.

My husband emphasizes responsibility; relative to him, I emphasize compassion. But we trust each other to practice both.

Truth — not binary thinking — drives unity. And we don’t have to be aging monks to find it.