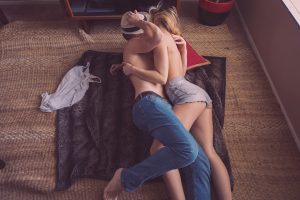 Illicit affairs are about sex. And it strikes me that at some point we might grow out of their shallow gratification. I can see the jaws dropping.

But come on, sex is, well, sex. It’s two people getting naked — or naked enough — so that they can make sexual contact. It’s a primitive act that satisfies a biological need. I know, I know…it can be much more than that. We’re talking an artful, loving culmination of two souls brushing the heavens and finding oneness.

But, hey, let’s not exalt affairs to that status. Now the protests — don’t tell me…yours was different, right? Or at least you thought it was going to be different!

“Even when we do precisely what others do, we tend to think that we’re doing it for unique reasons,” says Daniel Gilbert in his bestselling “Stumbling on Happiness.” He explains that our mythical belief in our uniqueness prevents us from learning as much as we could from the experience of others.

So if need be, humor me here. Let’s assume affairs are basically about sex. After all, when we say somebody was unfaithful, we generally mean they had sex with somebody other than the person they were committed to. So, wouldn’t you think we could learn to keep our pants on and excuse ourselves, if necessary, for a cold shower or something?

Affairs are serious betrayals. Couples, even the ones who are resolved, work hard to move beyond them and carry emotional scars.

We’re animals, though. And just the way we overindulge in turkey and stuffing or ice cream with hot fudge on it, we say yes to illicit sex, as though we’re oblivious to the consequences that follow the immediate gratification. More jaws dropping? How dare I compare overeating to a sexual affair?

Perhaps it’s time to call it what it is! OK, maybe that’s only part of what it is. Maybe we’re expecting sex to save us from ourselves or open the door to happily ever after. Sex doesn’t do that, though. And if the imminent affair is really a serious love affair, why not make it legitimate?

I realize that sometimes we find ourselves in unhealthy, even debilitating, relationships…and that an affair can seem like a lifeline. It’s not, though. It’s a deception, a false hope, a lie, a complication, a betrayal.

But it’s also very human. Studies show that roughly half of us–60 percent of men and 40 percent of women—-will have an extramarital affair. Men tend to do it for more sex and variety. Women tend to do it for more attention and reassurance of their desirability. Some argue that with more women working, we also have more women cheating … and that the reasons for both men and women are changing. Given the inherent secrecy of affairs, accurate statistics can elude us.

But clearly our roles have changed. Some men are looking for more intimacy. Some women are looking for the kind of sex they never really had at home, the kind men have sought in affairs. We can conclude that affairs are mostly about sex and ego–and sometimes the intimacy we’re not getting at home. And that hardly paints them in a better light.

Don’t get me wrong–I’m not suggesting there’s something “wrong” with just sex. If two adults committed to each other, or at least not otherwise committed, want to indulge in sex without the sweet and loving part, they can romp and scream and push their physical limits for pleasure, and sleep well afterward.

Cheating is cheating, though. It’s dishonest. Not good!

« There was never going to be a good enough mask …
Are you haunted by a lie? »