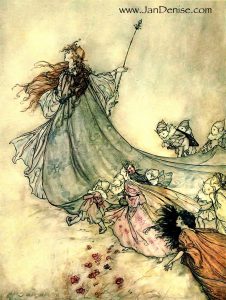 Remember your favorite fairytale? What can it teach you about yourself, why you’ve done what you’ve done and, perhaps, what you’re still waiting for?

Mine was “Cinderella.” She diligently swept and sang, undeterred and untainted by her mean stepmother and stepsisters. And, she was rewarded … with a prince, no less.

It’s so telling. I spent a big chunk of my life trying to smile while I forged ahead with what I thought was expected of a “good” person.

As it turns out, the sun and the rain come down on the just and the not so just. Darn, I knew that; I grew up with the Bible. And good behavior is its own reward — provided our motivation is pure.

I recently watched the movie “Michael” for the first time. It’s about a scratch-where-it-itches angel who ate too much sugar and taught people to take the long way home and laugh more.

It’s not about what we can see; it’s about what’s on the inside that we can’t see. And the handsome prince (or princess) doesn’t show up until we’ve found what’s inside. The prince can choose anybody he wants; and he wants somebody who has her stuff together, somebody who’s aligned with true goodness.

So, what exactly does goodness look like … or what exactly did Cinderella really have? She didn’t earn a lot of money or wield a lot of influence. She didn’t have a fancy wardrobe or education. She had the one thing that money can’t buy, a pure heart.

And the prince wanted a princess who would see and love him for who he was, without his wealth and power. He lacked nothing that his position could afford him.

The chariot and the gown that disappeared at the stroke of midnight were superfluous to his attraction to Cinderella. Still, it was Cinderella’s goodness that conjured up the fairy godmother and the finery.

I think we need to do more sweeping and singing. What a way to quiet the mind! That’s why we see devotees scrubbing stairs with a toothbrush and chanting for hours.

We don’t see a lot of them, though. Most of us are still trying to pay for a self-righteous cloak; and some of us have taken it beyond doing good deeds with an ulterior motive.

But let’s be painfully honest — some of us have even tried to earn our way with a toothbrush and a mantra. Getting down to what’s left at the stroke of midnight is the epic challenge.

What goes up in smoke is our security blanket. Who knew we were still holding on to it? It’s the job, the house, the school, the spouse or the kids we’re pushing to have more than we did! It’s whatever we cling to, despite the fact that it doesn’t win what we most want, which is unconditional love!

Take another look at your fairytale and you. Reevaluate what a prince or princess looks like. Then, take a look at your security blanket … and try to loosen your grip, in order to live the real fairytale.

« LIVE the wonder!
Sex, as Practical as Magical? »