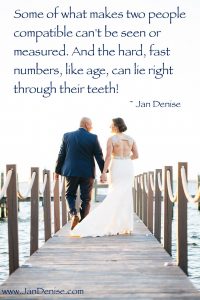 Age is a number. Theoretically, it’s indicative of how mature we are. But we find exceptions to that faster than we can get to the end of the sentence. But beauty fades, right? Nah — we all know people who get better looking. Skin loses its resilience? True enough, but not at the same rate.

And in much the same way, some people seem to put on the brakes and stop learning and growing at 40, while others seem to stay interested and interesting as long as they live. Some people stay physically vibrant and active into their 90s and counting; some start to “die” in their 40s.

“I don’t believe one grows older. I think that what happens early on in life is that at a certain age one stands still and stagnates,” said T. S. Eliot.

We’re learning, though. We look younger and die older. What used to be old is still young … and the older we get, the younger it is.

But there’s notable disparity between one person’s 40 and another’s, so general rules about how to date or marry — or dress or act — for your age amuse me. There are no set answers: Is 50 old? Is 25 still a kid, or a responsible adult? How long are you in the proverbial cradle? And when are you robbing it?

Is 18 sexy yet? Not if you want to hold on to your little boy. Is 50 still sexy? Duh … if you’re looking at Nicole Kidman.

Two people in their 20s who seem compatible could be grossly incompatible by the time they hit their 40s. One could go back to school for a PhD in sociology and join a swim team; the other could stay in the same factory job and sit in front of the TV at night.

Using that couple as an example, we can see how compatibility has more to do with attitude and lifestyle than age. Two people in their 20s are likely still formulating decisions that will determine how — and how long — they will live.

On the other hand, if our reader of 36 and his girlfriend of 46 have similar interests and intellects, and they connect emotionally and spiritually now, chances are they still will in 10 or 20 years.

He asked the question for a reason, though. And maybe the best answer I can offer is: What do YOU think is going to happen when you’re 46 and she’s 56; when you’re 56 and she’s 66?

If much of the attraction is sexual or physical, then they could easily grow apart. That would be true regardless of their ages.

No matter how old we are, to have a healthy relationship, we have to be honest with ourselves and our partner. He needs to openly share his concerns with his girlfriend. If she “kills” him, we have a no-brainer.

Sometimes just saying what we’re afraid to say out loud helps us to get clarity — or even alleviate the issue at hand. But in alleviating it for ourselves, we may raise it for our partner. That’s a risk we have to take.

Just because he decides he can deal with his feelings (and society’s), doesn’t mean she can, or wants to.

That said, there’s an inherent risk in committing to another person. It always makes sense to look at the odds — before playing them. Some of what affects the odds, though, can’t be seen or measured.

The hard, fast numbers, like age, lie right through their teeth! 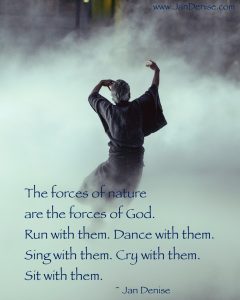 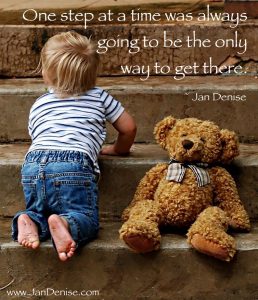 Sometimes we think we should have been able to do it better, faster, or easier. But one step at a time was always going to be the only way to get there. We were always going to have to start from where we were.

And it was always going to be the journey of a lifetime. … More